6 Unique Wedding Ceremonies Around The World

As wedding planners, we often have people asking us what are the most interesting and unique wedding ceremonies we have been part of. To us, each wedding is unique, as you can see in our very diverse portfolio of weddings. However, there are certain cultures around the world where we feel, have very unique wedding ceremonies that we haven’t seen. Starting with Japanese weddings.

A traditional Japanese wedding is held in a Shinto shrine. The bride is painted pure white to signify that she is a maiden to the gods. She will be dressed in a white kimono with a white hood to conceal her “horns of jealousy” which she feels toward her mother-in-law. This shows the bride’s submission to her mother-in-law and her resolution to be a patient and obedient wife. The couple must also drink nine cups of sake as a symbol of their union, after which they will be considered newlyweds. The families and guests present would also drink sake to celebrate the new bond between the two families. Sounds pretty similar to our local version of “yam seng” toasts, isn’t it? In Russia, civil ceremonies are compulsory as they are considered the official wedding ceremony. Couples who wish to hold a religious ceremony must also have a civil ceremony. The couple would need to file an application with the Department of Registration of Civil Statuses, commonly referred to as ZAGS, at least one month before the wedding day.

As part of the wedding ceremony, one of the rituals involves the ransom of the bride. Humorous challenges would be posed for the groom and his best man, such as belting out the bride’s favourite song or acting out a scene from the couple’s first movie together. This is what we do in Singapore too, before opening the bride’s gate to let the groom in.

During the wedding ceremony, a loaf of bread known as the “karavay” is also used to determine who will be the head of the family. The bride and groom will each take a bite of the bread without using their hands, and whoever takes the bigger bite will run the household. It’s no wonder the groom is usually the one who wins this game! A Peruvian wedding ceremony involves a “cake pull”. What’s that? Well, it literally entails the single female guests in the wedding pulling ribbons tucked into the wedding cake. At the end of these ribbons would be charms attached to them, but one of the ribbons would have a ring tied to it. The lucky girl who pulls that particular ribbon is said to be the next bride in line!

Our Singapore version to this little wedding contest is to have the bride toss her hand bouquet and the throng of unmarried female guests behind her would fight to grab it. Which game would you prefer, ladies?

The Scottish people “blacken” their brides by pouring flour, soot, rotten eggs, spoiled curry or any foul smelling and grungy looking substances you can possibly think of! Nowadays, the groom is also dragged into the mess. Families and friends would also make a din by banging drums and blowing whistles. This is usually done a few days before the big day to give the poor couple some time to wash off the junk and odours.

The Tidong community in Sabah, Malaysia and Indonesia do not allow the bride and groom to use the bathroom 72 hours after their wedding ceremony. Oh my, that’s three days! The couples are even supervised by their families to ensure that they do not disobey this golden rule.

The newlyweds are allowed only minimal food and water during these three days. The Tidong community believes that couples who do not hold on to this practice would have terrible luck for their marriage, and that couples who do survive this “ordeal” would have abundant fertility and be blessed with many healthy children.

Lord Of The Rings Wedding

We can’t end this article without mentioning one of our own. We recently had a Lord of the Rings themed wedding, and it was awesome! We made many of the props ourselves, with the help of the bride too. We didn’t do anything really different, but it was one of the most unique weddings I have ever been a part of. 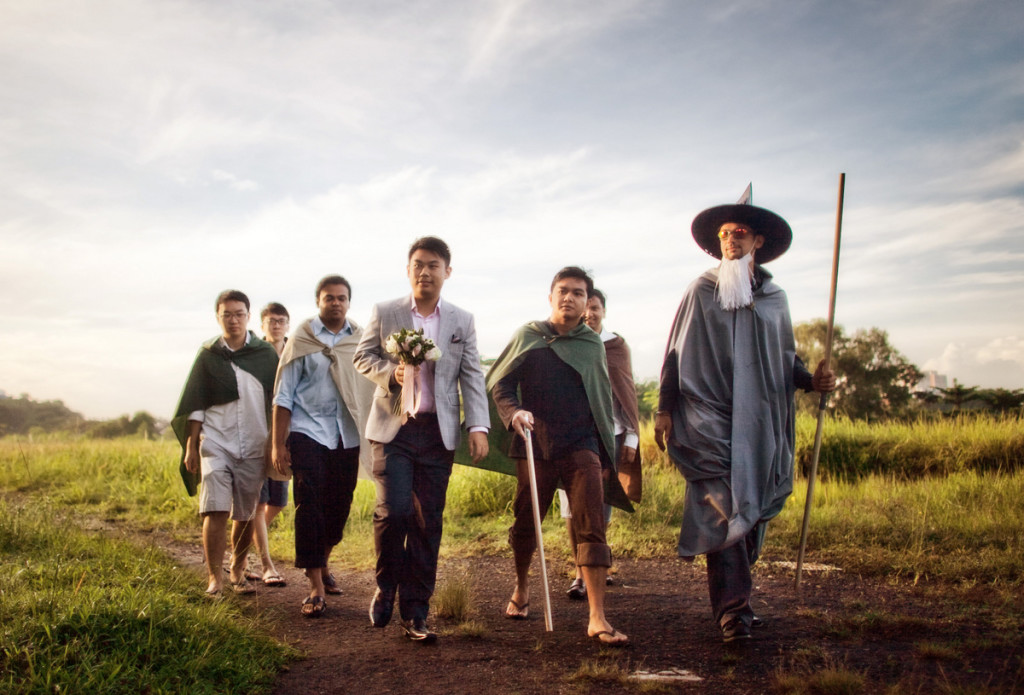 Because the wedding couple were such huge fans of the wedding, we incorporated that idea into the wedding. Each table were named after a place in the LOTR mythos, and we had interesting decorations like the above. We always try to do what we can to make our clients feel exclusive and special!

What do you think? Are these weddings unique enough? If you have been part of any unique weddings, do share in the comments below!