Marrying the Girl of Your Dreams

It is every man’s wish to marry a girl of their dreams, and Shawn is fortunate enough to be able to do so with Carolyn. Everything started back in 2012, the year which Shawn saw Carolyn for the first time.

Amongst many millennials, the word “eye-candy” is very often used to describe someone whom you view as attractive. As you should have already guessed, Carolyn was Shawn’s “Eye-candy” during their years of studying in polytechnic. Not many are lucky enough to turn their dreams of getting together with their “eye-candy” into reality, but fate gave Shawn the chance to officially bring Carolyn into his life, allowing him to call her, his girlfriend. From there, their love story began to sprout for many months ahead.

After a few months of being together, Shawn was given the chance to go overseas to study. From there onwards, the couple went into a Long-distance relationship (Or as many would refer to as “LDR”.) 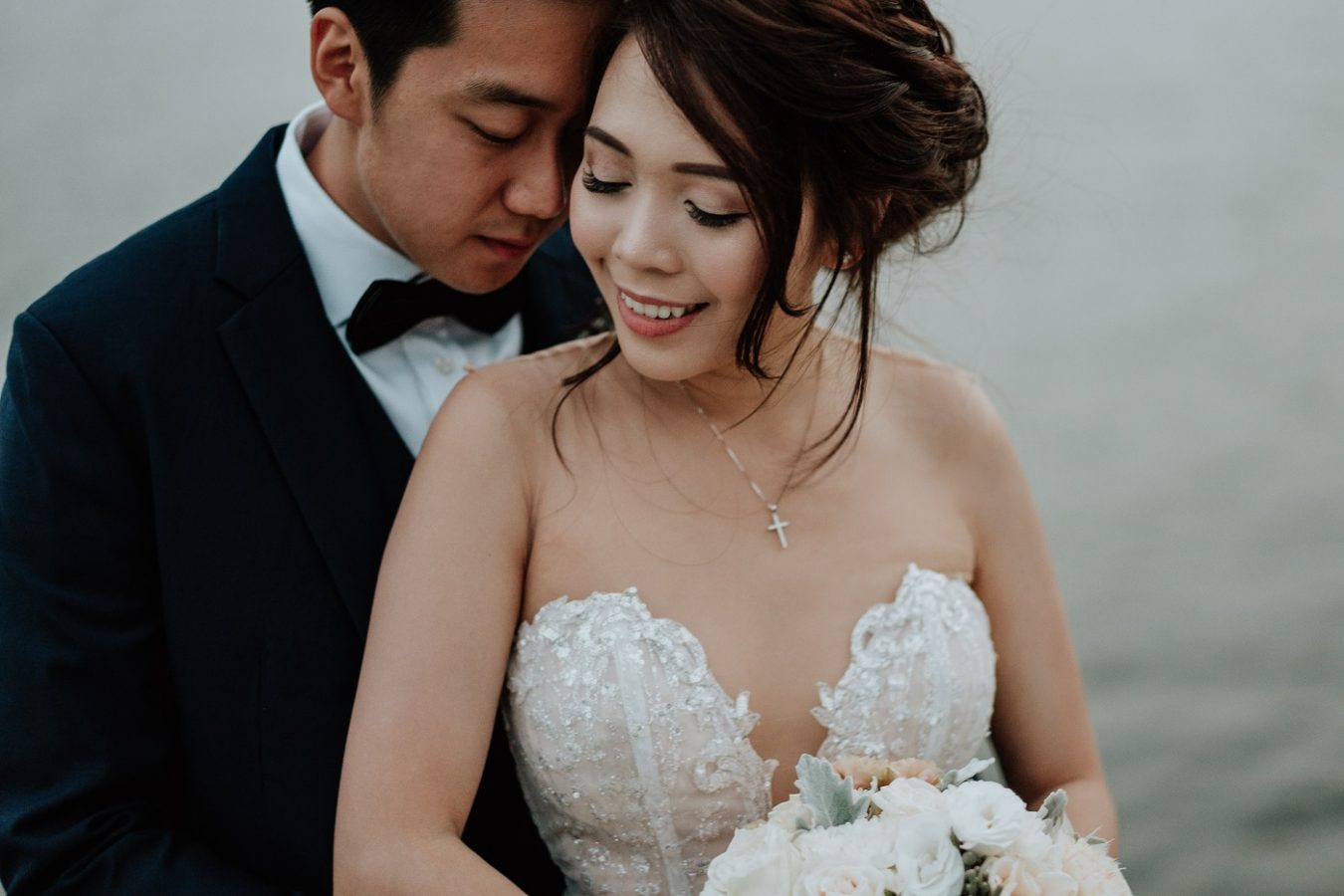 In every relationship, there are always obstacles for couples to overcome, also to grow stronger from. Shawn and Carolyn took up the challenge of staying as a loving couple although being many miles apart, and may we say, they did a pretty good job at it – how would we know? Well, the couple went on a holiday after Shawn came back, where he took the chance to pop the question – and of course, Carolyn said “Yes!”

7th of July is a date to remember in this story, as it was the one date many significant things happened for Shawn and Carolyn. On the 7th of July 2014, Shawn took the leap of faith by asking Carolyn to be his girlfriend, marking the start of their love story. Fast forward to the 7th of July 2017, Shawn took the second leap of faith, by asking a question which would change his life forever – popping the question of “Will you marry me?” to the person he wanted to spend rest of his life with.

One year later on the 7th of July 2018, Shawn and Carolyn made their vows to each other. This marked the beginning of a brand new phase of their life together, as a married couple. 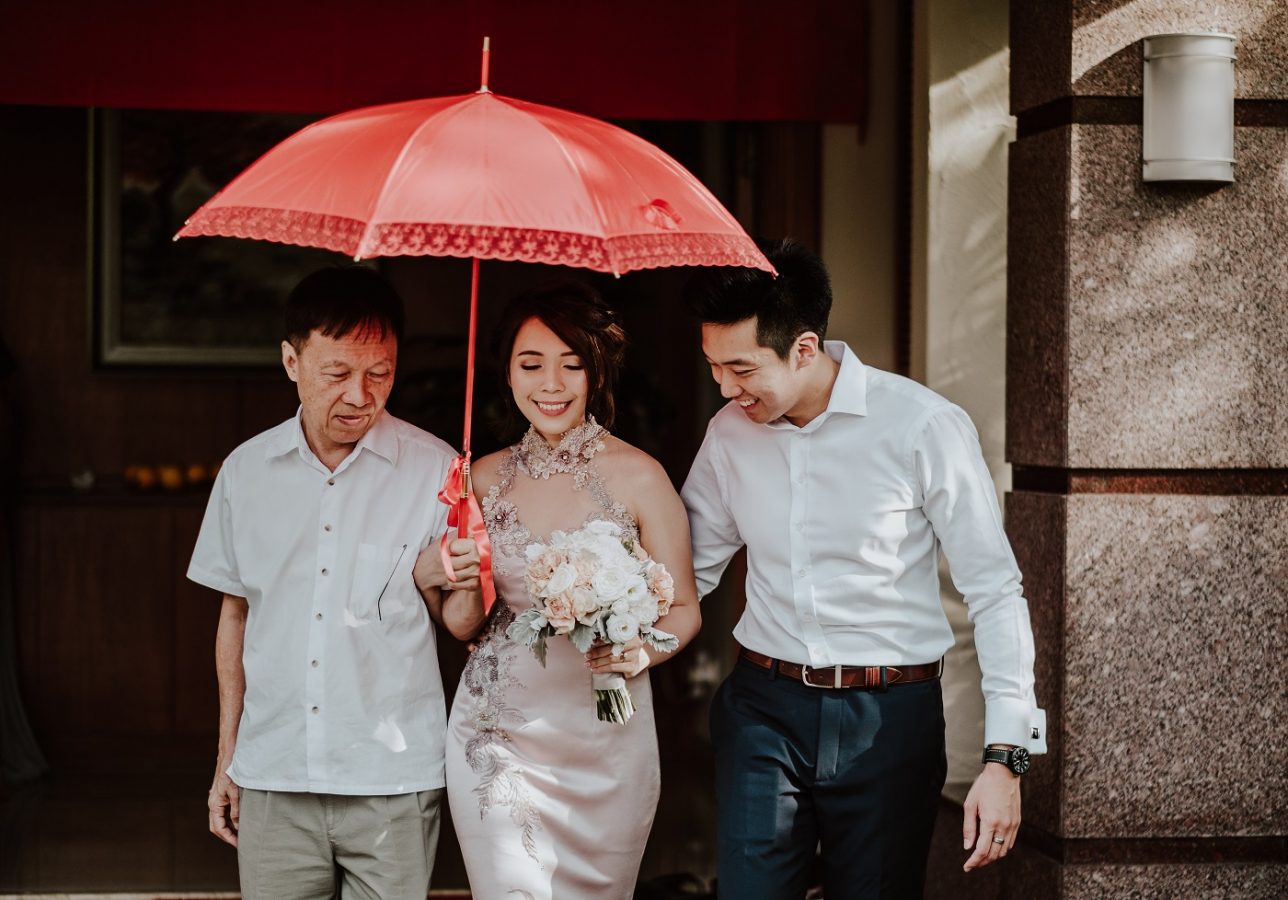 Held over a period of 2 days, Shawn and Carolyn had a wedding which one might think was out-of-the-ordinary. Gate crashing is a customary practice in most Chinese Weddings, often held in the wee hours of the morning. However, the couple decided to hold it only late in the afternoon, which lead to a Bridal Party Shoot held during the midst of a sunset. Together with the addition of sparklers, the entire atmosphere at the shoot was enhanced, making the first day of their wedding a day to remember. 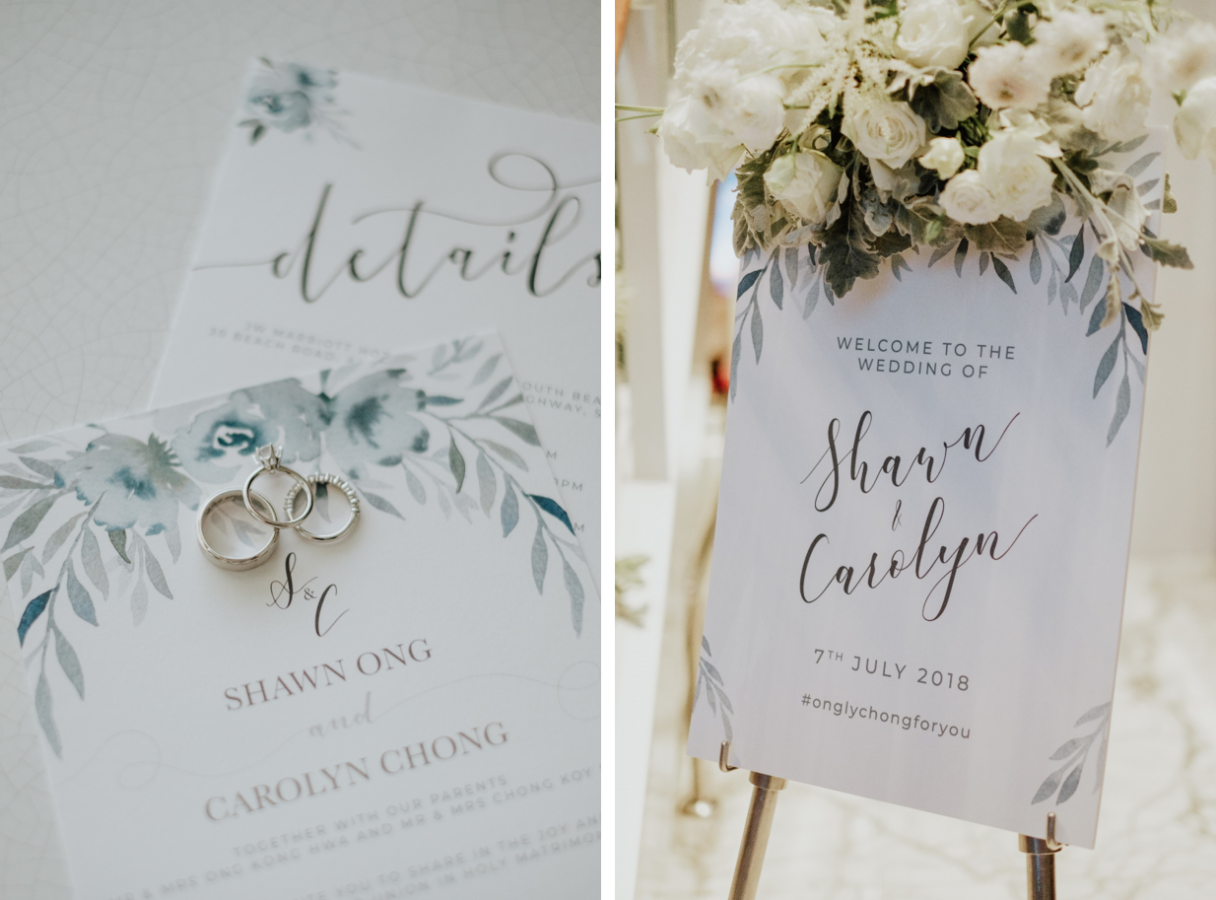 Starting off the second day was a tea ceremony held at the beautiful cocktail foyer of JW Marriott’s South Beach Ballroom. With a staircase lined with white florals fronting the building entrance, it led guests to the start of a day to remember. The tea ceremony was carried out against an LED screen backdrop with the mandarin word “xi”, where it was specially designed for the wedding by one of the couple’s friends. With Carolyn wearing a traditional cheongsam and Shawn in his suit, they served tea to the family and friends whom they held close to their hearts in exchange for blessings of a lifetime. 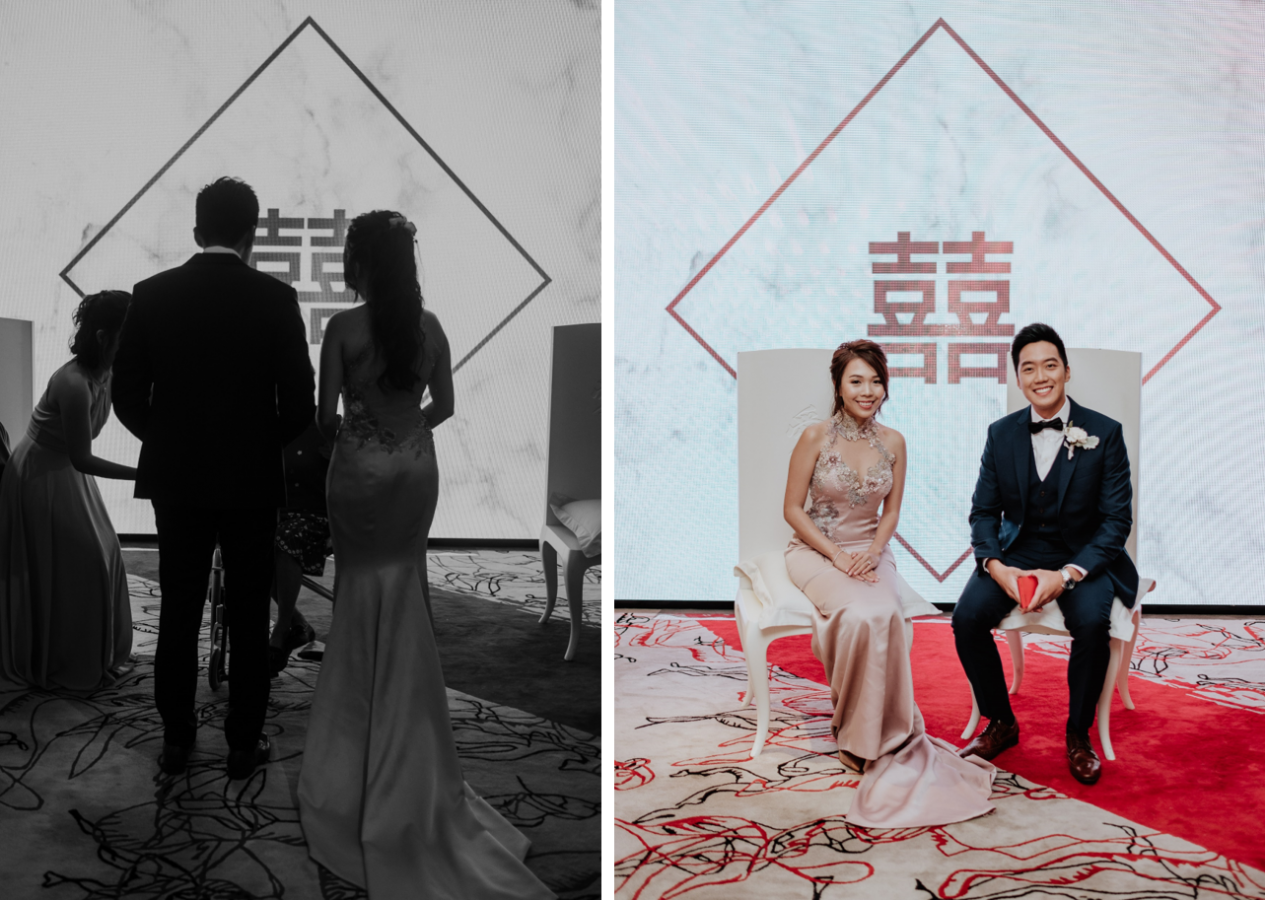 After the ceremony, the bride changed into her wedding gown for the night. To ensure that all memories of their wedding day was captured, the bride requested for a first look to be done. Although this was not included the schedule, we were able to inform the photographers, videographers, bridal party, and most importantly the groom, who were quick on their feet to get ready for the last minute first look. In the end, everything turned out perfect and became something for everyone to remember. 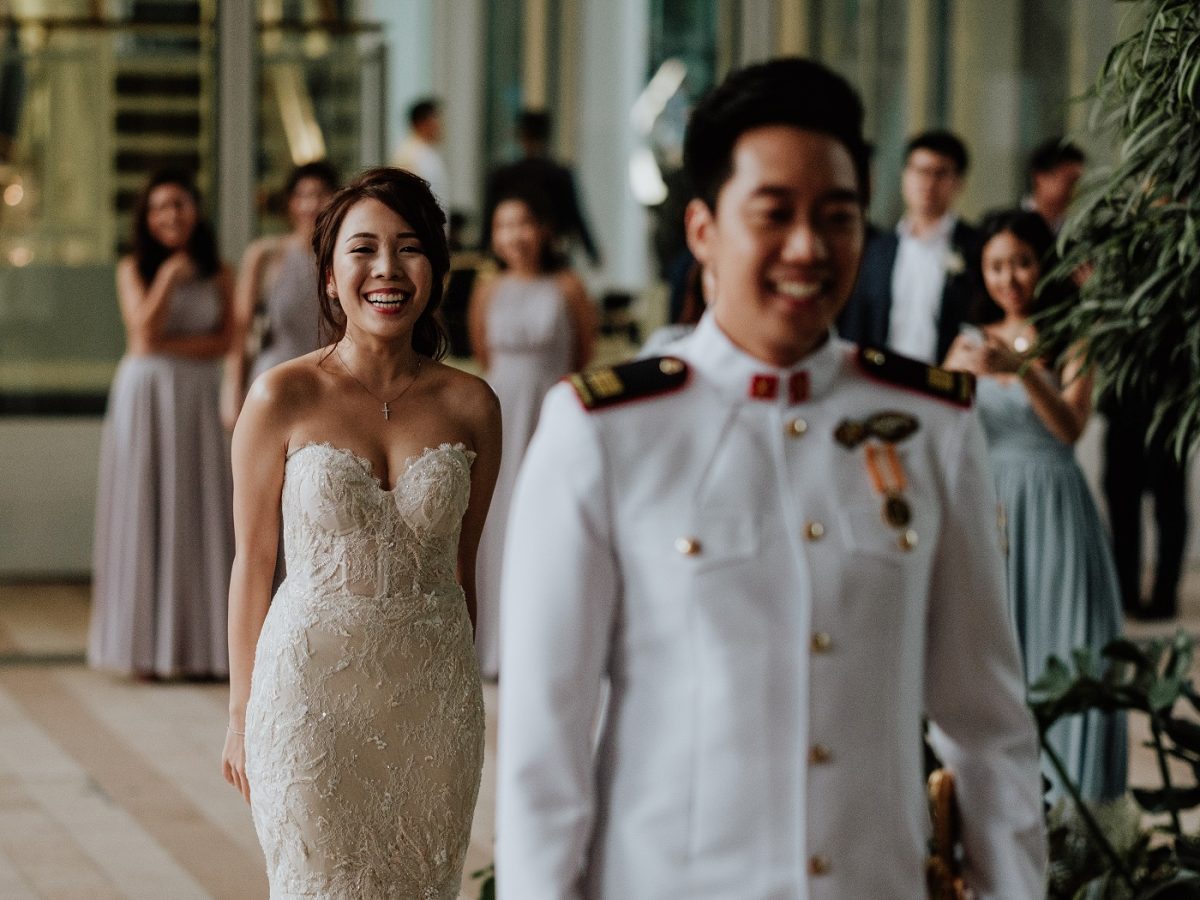 As mentioned before, Shawn and Carolyn had a wedding one would think of as “something you don’t see every day”. It happened in the blink of an eye, so don’t sit back and relax while you read this, as you might just miss some exciting parts in between!

Having 3 march-ins in total, the first one was held during a Holy Matrimony. With the song “Beautiful in White” playing in the background, hand-in-hand and witnessed by many, Shawn and Carolyn walked into the ballroom for the first time as one. It was a scene to remember, as we think about how far the couple has come since the day Carolyn caught Shawn’s eyes. Songs of praise to the lord echoed through the banquet hall as the worship team sung, creating a hallowed atmosphere. With this, the pastor then led the couple through the ceremonial process, pronouncing the couple man and wife at the end of the Matrimony. The ceremony took about an hour or so, and once again with two hearts beating as one, the couple marched out of the ballroom as Mr and Mrs for the first time in their lives with petals tossed in the air, forming a perfect picture. 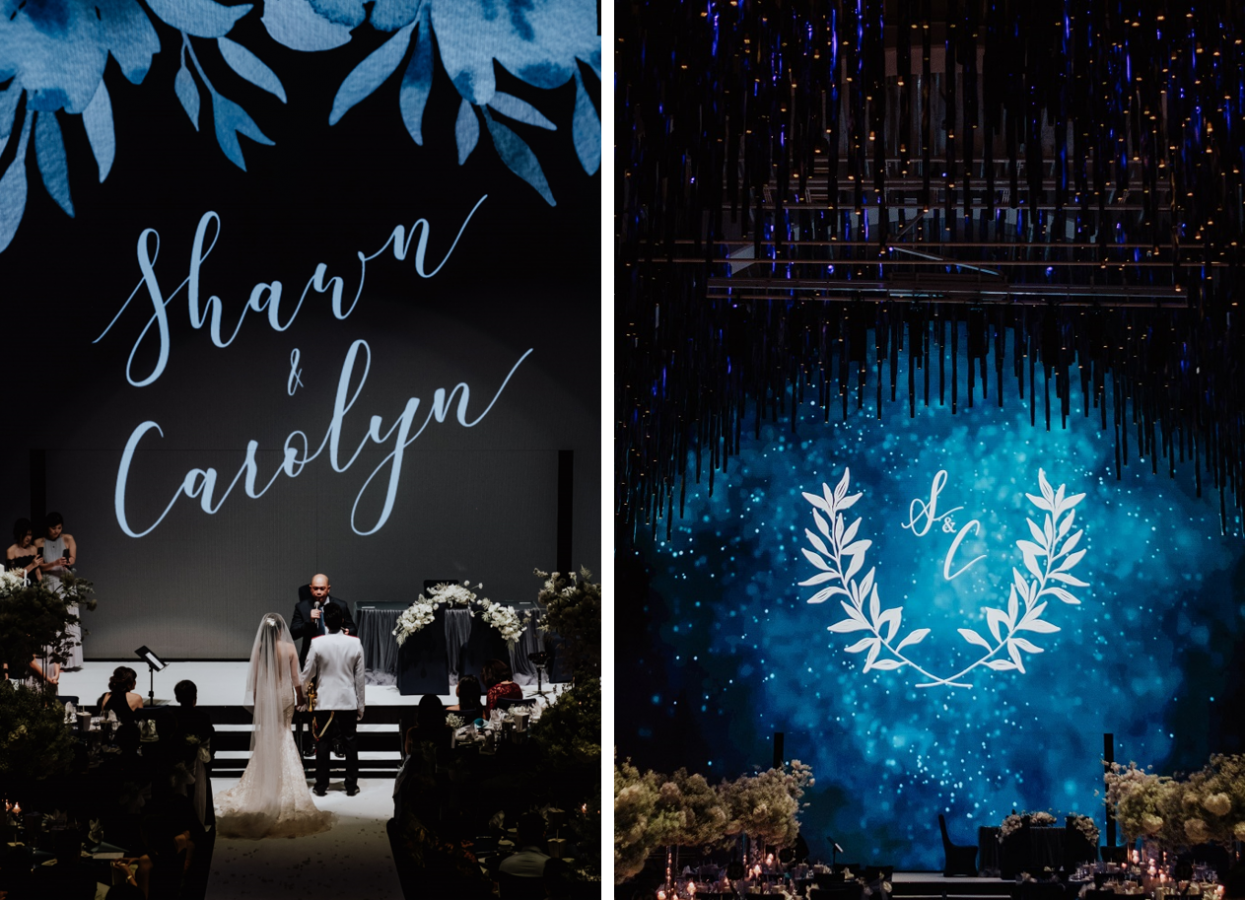 Seemingly different from the first, the second march was “military” themed. As the ballroom doors opened, everyone was in awe as officers began marching into the banquet hall, unsheathing their swords uniformly in line along the aisle. Behind them was Shawn and Carolyn, but it being “military” themed, this march-in was not going to be as easy it seemed for the couple – along the route, obstacles were formed for the couple to overcome as they marched towards the stage. In the eyes of guests, this may have been just a normal segment which held no meaning during the wedding dinner.  But for the couple, it held an important significance, for as they overcame all obstacles and arrived upon the stage, it served as Shawn and Carolyn’s promise towards each other, that they would, no matter rain or shine, stand by each other till the end of time. 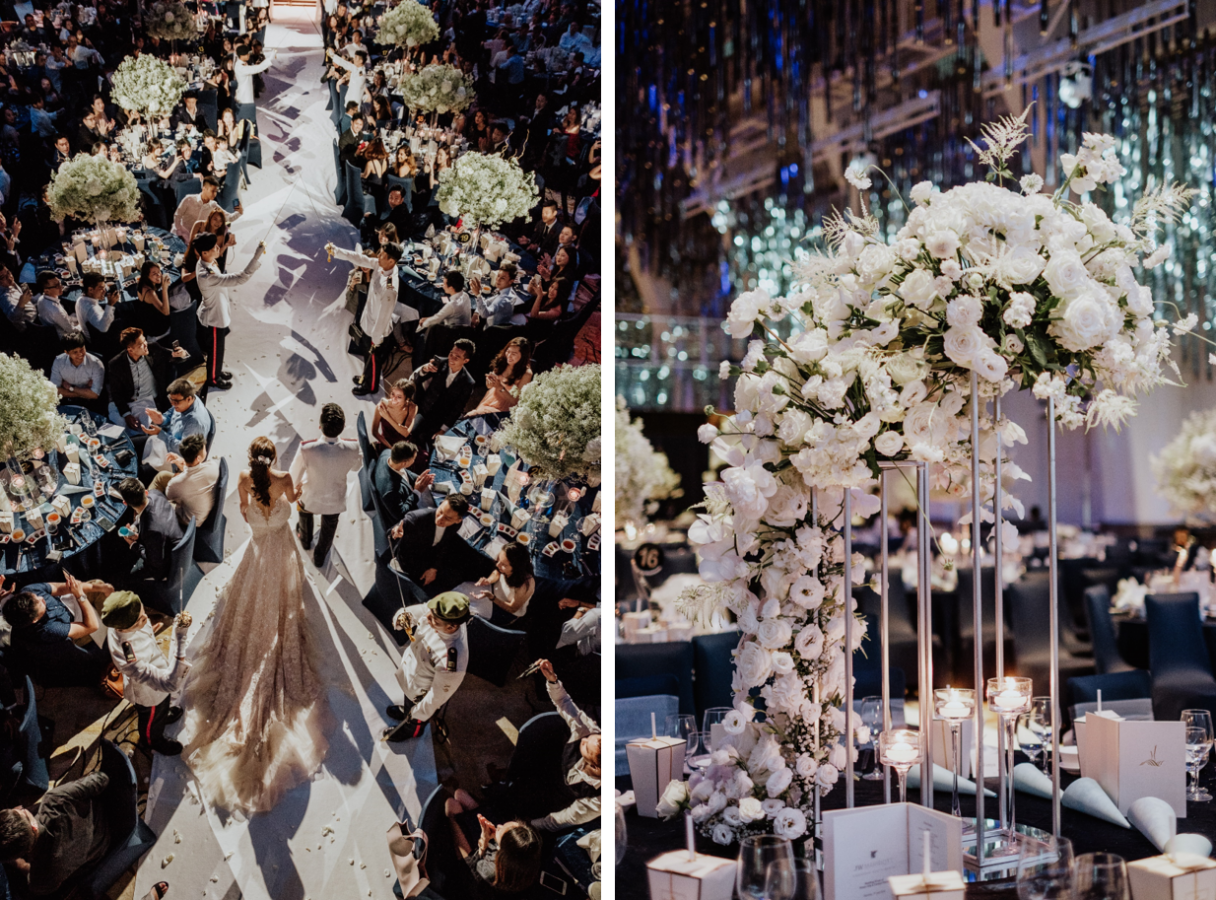 Following the end of the second march-in, the couple left the ballroom for a change of clothes. The emcees for the night were Shawn and Carolyn’s friends, where they hosted a game segment using “kahoot”. This segment received tremendously good response from guests, which filled the ballroom with much laughter and joy. 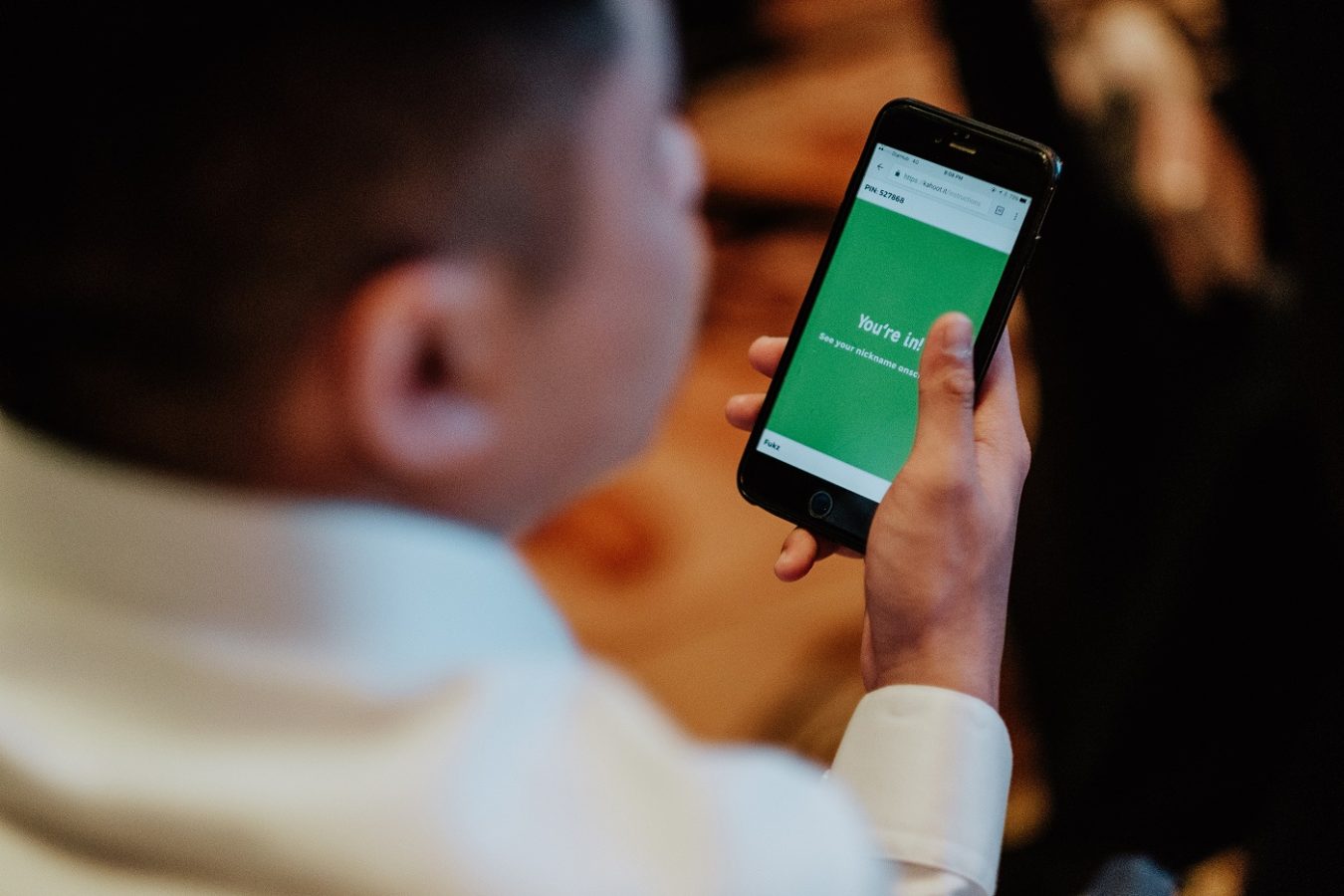 As they say, finales are always the best part of the show. In the 3rd and last march-in, the entire bridal party ensemble danced into the ballroom together with the couple’s emcees, followed by the couple themselves at the back. If we told guests that the dances were not rehearsed beforehand, we’re pretty sure none of them would have believed us, as true effort and joy put into the dance made it one of the many highlights of the night. 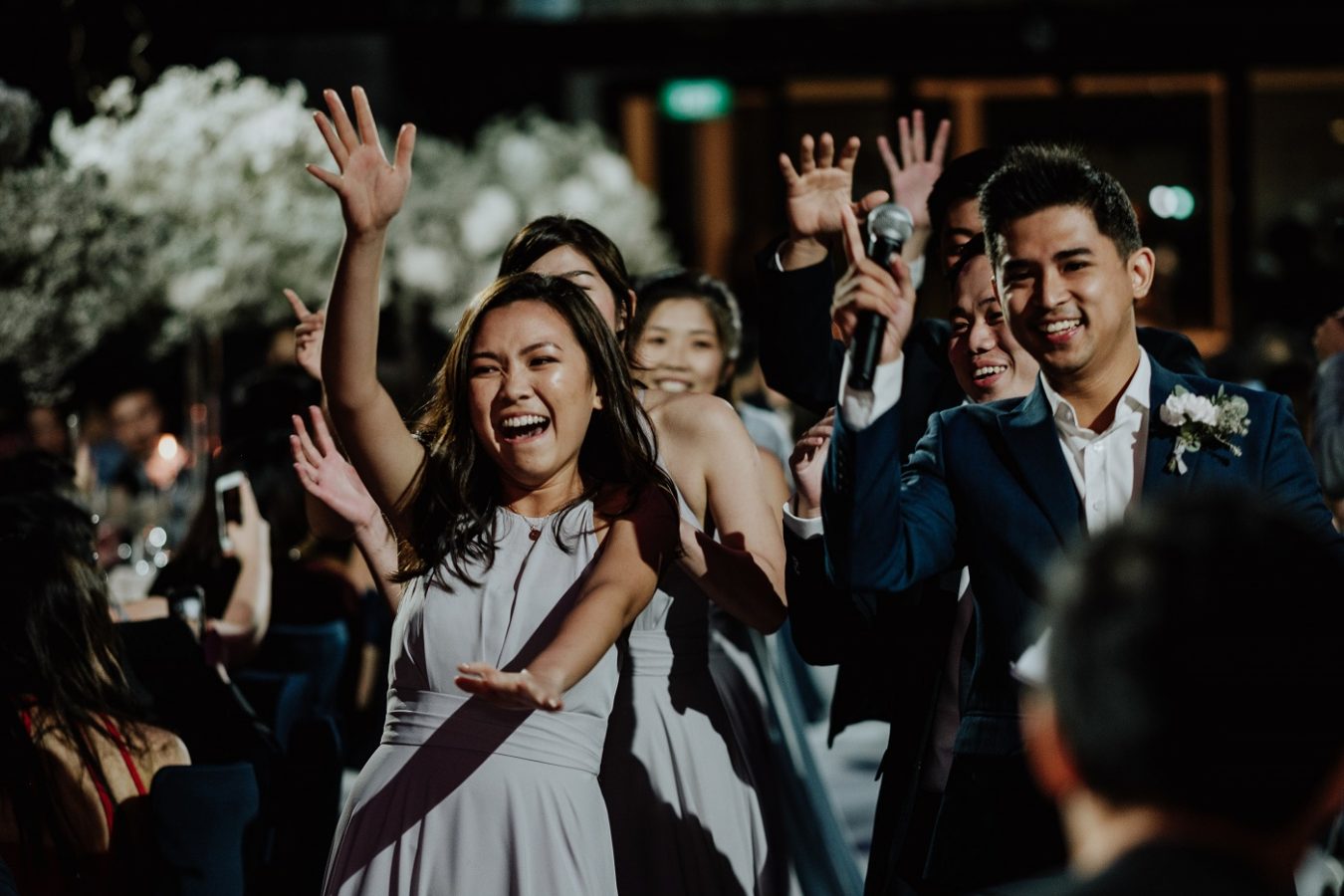 Coming to the end of their wedding journey, the best way we could describe the whole process is through the words – “Jam-packed, but so fulfilling!” It was a hectic night filled with multiple videos to screen, lighting effects to cue, atmospheric music to play – But as the last note was played to end the night, the smiles on the faces of guests made everything worth it. Most importantly, the strength of love between Shawn and Carolyn definitely touched the hearts of everyone present during the night, making it such an impeccable and blissful one to remember.